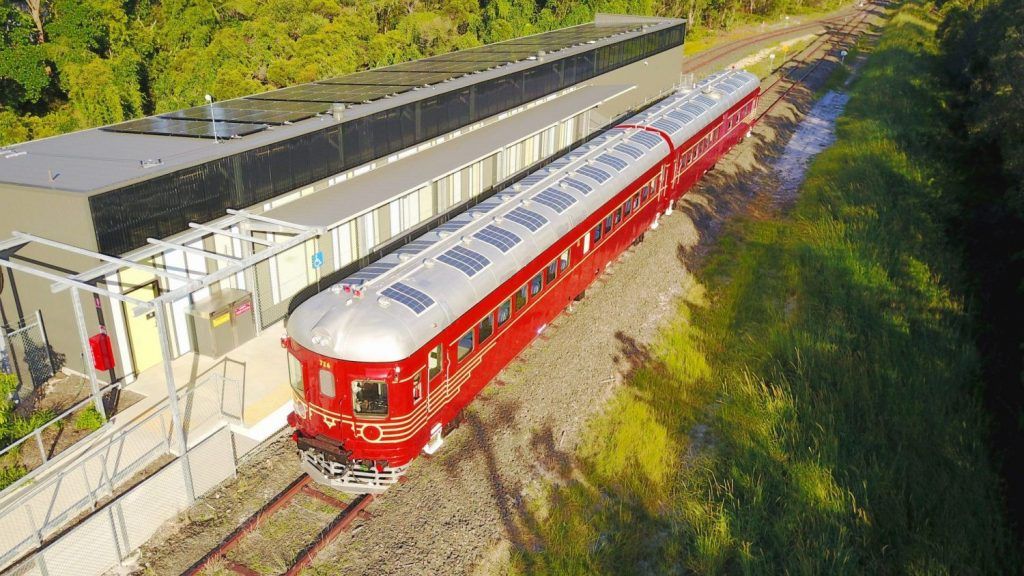 Increase in population, dearth of public transport and reliance on vehicles has increased road transport in Australia, making it high on transport pollution.

It is high time Australia took an action to reduce greenhouse gas pollution from the transport sector. This demands a shift to renewable-powered cars, trams, trains, railroads, buses, etc. Solar transit is in vogue in the renewable energy sector.

Making use of the abundant renewable energy sources and the technological advancements, the state and federal governments have to join hands to come up with a fleet of sustainable transport solutions that would be carbon-free.

Compared to cars it is easier to solar power a train. Cars have less space for solar panels and they don’t have a fixed route. Trains on the other hand have ample space for solar PVs on the roof and have a fixed route. Above all, trains are a hot subject in renewable energy projects.  Because during each station it can be recharged with the electricity generated by static solar PVs.

Byron Bay Railroad Company has made solar dreams for transportation a reality with its World’s first Solar train open to all in December 2017. This four million dollar(AUD) project was privately funded by a local businessman, Brian Flannery.

With flexible, curved solar PVs on its roof, it relies solely on solar energy on a 3 km coastal track that links the Byron Town Centre with the North Beach precinct and Byron Arts Estate, in New South Wales, Australia. This is a net carbon positive travel.

Byron Bay has restored a heritage 1949 two carriages red rattler train, with a seating capacity of 100 people, additional standing capacity and a luggage room. The lightweight aluminum fuselage is the main raw material for building this solar train. The solar PVs on top are capable of producing 6.5kW of solar power.

The train originally had two diesel engines. One of the diesel engines transformed into an electric motor. It has a battery capacity of 77 kWh, which is similar to a high-end Tesla Model 3.

As a precaution, one diesel engine is retained, in case of any failure. The train has mains power from a certified green supplier as it might need power during the winter season and cloudy conditions. The train is powered by batteries which are fed by 23% of the energy generated from solar PVs onboard the train shed and those on the roof of the train.

Byron Bay Railroad Company was awarded the 2018 Rail Sustainability award at the Australasian Railway Association Awards for the invention of the world’s first solar-powered train.

A 30kW solar PV array is installed at the main station to charge the train’s battery. Hence the train can run off the power collected straight from the sun. Once the battery is full, the train can complete 12-15 trips.

The regenerative braking capacity of the train recycles a significant amount of energy back into the battery.

The mains power will contribute additional power requirements as and when needed. 77% of solar energy generated by train service is fed back to a local community via green energy supplier Enova.

Electric Trains in Other countries

In the Netherlands, the Dutch national railway has attempted to provide all the electricity needed to power the train from a fleet of wind turbines, from offshore wind farms.

Indian railways have come up with the idea of powering its air conditioning, lights and fans from the electricity generated by the solar PV. It saved nine tonnes of CO2 per year, per train. The train is running on diesel. But solar PVs on top of the train serve the utility purpose.

With the plan of making Indian railways carbon neutral by 2030, the government plans to build solar farms of 20GW near the land close to railways and use this solar energy to feed railway substations and the grid.

Argentina too plans a similar venture to power a 300km train line by using a mix of rooftop solar PVs and solar farms.

In 2019, the United Kingdom launched the world’s first railway line powered by a 30kW solar farm. A recent study states that solar energy could replace 10 percent of the country’s train routes

Byron’s solar train can be a stepping stone for spreading renewable energy revolution to other transport modes as well. This Solar Train showcases how we can unleash the unlimited potential of the sun. Thereby transforming our transport system and help it tackle climate change at the same time.

Brian Flannery, the owner of the Byron Bay Railroad Company, believes this technology could be used for inner-city trams with additional charging points.

There are many electric trains around the world with overhead wires or electrified rails. Using the power supplied by a battery charged by a full solar system to run the train is what makes this solar train unique.

Even though the solar train is a great initiative, there are certain Limitations. As Byron train runs only once per hour, it has ample time to recharge. In busier areas this wouldn’t be possible.

The solar panels on the train will supply only a very small fraction of the overall power demand. It will not be able to provide constant power to pull around the 21 compartments attached to the train.

Renewable energy alone won’t suffice to power the train. It will have to depend on other sources of power as well.

With the pace at which technology is advancing, the current shortcomings will be rectified and can expect efficient and fully solar powered trains in near future.

There is always a room for improvising the present limitations. It can be either by increasing the number of panels, or adding solar panels along the track line or by adding more batteries to store renewables. The new fabrication technology is likely to increase the efficiency of solar panels by 90-100%.

Powering the trains with solar energy will be a great initiative for the future. It has more advantages than drawbacks. Implementing this idea will have the best benefits for society by making railways greener and cleaner.