Should buses use solar panels? 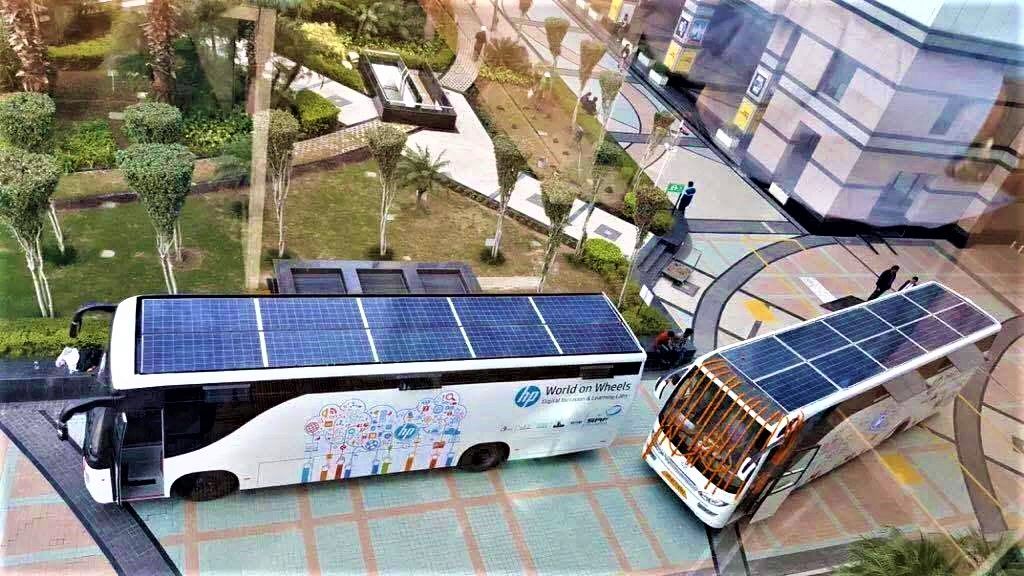 Buses are an efficient mode of public transport as it carries lots of people. It is much more efficient than cars. A bus runs many miles every year on highways and urban areas.

Buses driven with diesel fuel leave an unfathomable negative impact on their nitrogen oxide and carbon dioxide emission. Buses going zero-emission with solar energy is a win-win solution for bus companies and the environment. It is the best and cheapest shortcut to a greener profile.

When equipped with solar panels, even diesel engine buses can become greener and efficient.  With this people will have more access to climate-friendly travel.

A solar bus or solar-charged bus is a bus that is powered mainly by solar energy. Solar panels with photovoltaic cells are attached to the vehicle’s roof. It converts the sun’s energy directly into electric energy to be used by the engine.

The average cost to build a solar-powered city bus would be much lesser compared to the cost of building a city bus. A city bus would cost around $40,000. This has triggered many to implement the idea of solar buses.

The world’s first solar Power bus was first introduced in 2013 in Adelaide, Australia. However, it charges from rooftop solar of Adelaide Central Bus Station. The battery of the bus needs to be set up for charging hours before the journey starts.

Off late Brisbane has been trialing on an electric bus that runs on 100 percent solar power. Transport operator Transdev developed this. 250 solar panels are installed bus depot rooftop. It charges 10 Tesla Powerwall at the depot. Buses will charge from these solar batteries. The onboard battery allows it to travel up to 300 kilometres without a recharge.

Many countries doing research and development in the area of solar buses. With the idea of reducing the dependency on the bus depot for recharging, the innovators have come up with the idea of installing solar panels on the roof of the bus.

With the goal of being carbon-neutral by 2030, FlixBus has launched buses equipped with solar panels. FlixBus is using Ultra-thin and lightweight solar mats on their buses.

These solar mats keep the battery charged. The alternator need not charge it using fuel. This bus runs twice a week from Dortmund to London. It assures a reduction of 7 percent in diesel consumption.

All the onboard equipment like USB ports, sockets, air conditioning, wi-fi, and a media entertainment system will work with solar power.

The bus saved an average of 1.7 liters of diesel per 100 km, thus saving around 10 liters a day. Based on the results of this pilot study they plan to implement this for more buses.

Go-Ahead Group has successfully operated 18 buses with solar panels in Britain for more than a year. Such buses made a savings of 1.4litres of diesel per bus per year and has reduced about 3.7 tonnes of carbon emissions per bus.

The success of their trial in Britain gave them an idea to implement this plan in Singapore. The assumption was that it would be more effective in the climate of Singapore.

On a trial basis, bus operator Go-Ahead Singapore has installed ultra-thin solar panels on the roofs of two of its buses. These buses are the first of its kind in Singapore.

Panels Specially Made for Buses

This reduces the load on the vehicle’s alternator. It helps in saving fuel and reduces carbon emissions.

In a 6 months trial, the company would get an evaluation of the buses’ performance and effectiveness in using solar energy to reduce carbon emissions and fuel consumption.

Based on the findings from the current trial Go-Ahead Singapore will be installing solar panels on other buses too. As a result, it will be a great saving in the form of fuel and clean nature.

Certainly, the excess energy can be store in the battery. The stored energy can be used at night or when the weather is not capable of generating power. Subsequently, it can charge from the charging stations.

The government of Australia is always encouraging the use of green energy and low-emission technologies. Solar-powered buses are an apt way of doing it.