Solar power in Australia is a fast growing industry. As of September 2020,  Australia has over 2.56 million solar PV installations with a combined capacity of 18,526 MW photovoltaic solar power, of which at least 4,426 MW were installed in the preceding 12 months. Australia has the highest uptake of solar globally. Having the highest solar radiation per square metre, Australia has the best solar energy resource in the world. Australia receives an average of 58 million PJ of solar radiation per year, which is 10,000 times more than its total energy consumption. The Renewable Energy Target and government policies prompt the maximum utilisation of solar energy.  Electricity generation is increasing as a consequence of the development of photovoltaic and concentrating solar thermal technologies through substantial research and development programs.

Sun is the original source of all energy. It provides 100% renewable energy.  Global warming is one of the major environmental challenges that the world face today. In most countries, a major portion of their total energy is from oil, coal, and natural gas, all of which are fossil fuels. We depend on those fuels to heat our homes, run our vehicles, power industry and manufacturing, and provide us with electricity. Solar energy produces no pollution and it is a renewable source of energy. Fossil fuels are on the verge of depletion whereas we have nothing of that sort to worry about solar energy. As long as the sun burns, it is available in abundance. The production of solar energy in cities is clearly a way to diminish our dependency on fossil fuels and is a good way to mitigate global warming by lowering the emission of the greenhouse. Going for a solar system is actually an investment for the future of our planet.

Makes one capable of producing their own electricity

With solar panel installation, one can generate their own electricity. They become less dependent on the electric utility thereby reducing electricity bills drastically. The average life span of a solar system is 25-30 years, which means one can cut down their electricity bill for a pretty long time. With the increased plugged in life and natural disasters caused by climate change, the grid is not very dependent. Power outages and blackouts are more to be expected. It would be ideal to combine battery storage with solar panels so that one can power their house even at the time of outages. With a residential solar system, the home is powered by rooftop solar panels during the day and by energy stored in the battery at night. By

To promote the solar power business in Australia, the government has introduced various solar incentives and rebates. The investment tax credit (ITC), or the federal solar tax credit, allows one to deduct 26 percent of the cost of installing a solar energy system from their federal taxes. The ITC applies to both residential and commercial systems, and there is no cap on its value. An average solar shopper saves nearly $8,000 to $9,000 on the cost of going solar as a result of the ITC.

Fall in the solar installation prices

The cost of solar is dropping across the nation. In a decade the cost of energy has dropped by 82% for photovoltaic solar, by 47% for concentrated solar energy (CSP), by 39% for onshore wind, and by 29% for wind offshore. The awareness of climate change and the rules to reach 100% renewable energy by 2030 has all accentuated solar installations and solar farms across the country. The fall in price is due to improved technology, economies of scale, supply chain competitiveness, and the growing experience of the developers.

With the fall in solar installation prices, it is the ideal time to go for solar now. More and more people are going for solar installation.  It is a herculean task to choose a solar dealer from the numerous companies with more or less similar stories. Make sure to go to the ABN lookup website and type the company name to extract the registration date. A lot of retailers tend to mislead clients saying they were in business for more than 10 years. Regen Power established in 2003, have done more than 25,000 residential, commercial and off-grid solar installation in Perth. Regen is the preferred renewable supplier for some mining giants like Rio Tinto, BHP Billiton, BC Iron. Regen deals with leading brands of solar panels, inverters and batteries.  They use only CEC-approved and qualified electricians. They never compromise on the quality balance of the system. Key components of their success are the quality of their products and services, affordable pricing, ongoing innovation and futuristic approach. Regen has won the Product Review Award of 2021 and that vouch the existence of Regen Power as a brand name in the solar power industry. 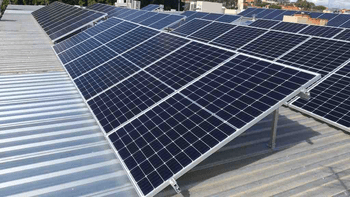