From local weather to electricity generation of national electricity market (NEM), the second quarter of 2019 brought in some “different-than-usual” changes. The climate was warmer than the previous 10-year average and the east coast registered very low rainfalls. This led to lower heating requirements throughout the country. Except for Adelaide, heating requirements of Q2 2019 were lower than the second quarter of 2018. As seen from data from the meteorological department, all major cities recorded higher than average temperatures. 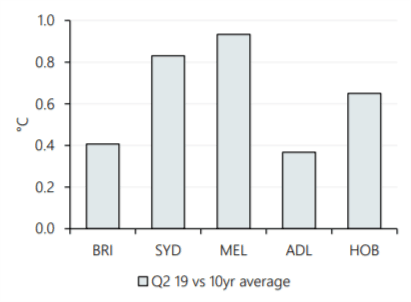 Large reductions in electricity demand were noticed throughout the country,  mainly in NSW (-130MW) and Victoria (-111MW). Rising demand for rooftop solar systems and lower average daily temperatures were the main driving factors for this change. Emissions in the national electricity market were low due to the lower use of brown coal; increase in variable renewable energy (VRE) like solar ; and lower overall demand. Over 3,700 MW of VRE was deployed since the second quarter of last year. On the other hand, due to low water levels, hydropower generation suffered in this second quarter with an average reduction of 463MW. However, this is still better than this year’s first quarter.

Average large-scale solar and wind capacity increased by 47% since Q2 2018. To name a few, the new solar and wind installations include the Beryl (87MW), Clermont (75MW), Numurkah (100MW); and Coopers gap (440 MW), Lincoln Gap (212.4MW) and Yendon (142 MW) respectively. Queensland has the largest increase in PV output. In the case of battery storage and pumped hydro, situation was relatively stable with only a slight decrease as shown in the figure. NEM emissions were only 4.1 million tons of CO2 – lowest since 2011. Day time emissions were mainly curbed due to rooftop PV systems. However, the lowest emissions were during the evening times. Furthermore, AEMO has pointed out that higher outputs from hydro and GPG as the reasons behind this trend.

Finally, the wholesale electricity prices increased in Victoria and Tasmania (due to lower hydro power and coal output). Comparatively, the prices were lower in South Australia, owing to the higher periods of negative pricing. Queensland was relatively stable at $94/MWh. The price reduction due to higher VRE, as mentioned before, was balanced by the poor hydro power output. During this quarter, average midday prices hovered around $70-80/MWh. Please refer to our previous article, for the summary on the western australia’s electricity market during the previous quarter.

Is solar powered road a reality?