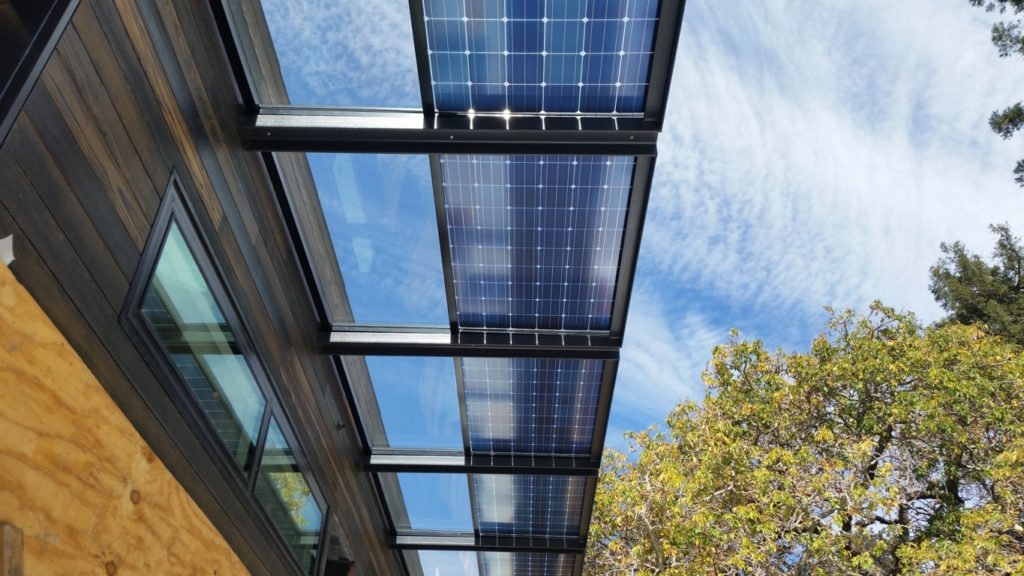 Roughly speaking, the traditional solar cell technology in mass production includes the monocrystalline and polycrystalline varieties. Thin Film still remains as the tertiary option owing to its efficiency-price-space ratio – more about it in a bit. There are other classifications based on the manufacturing processes and the materials in use. However, they all fall under the previously mentioned trio of parent umbrellas with only one side being photovoltaic. Most tier-1 panel manufacturers have the mono and poly PV cells in their product catalogue as both of them have significant advantages depending on their usage scenarios. When both sides of a panel can generate power, they become bifacial solar panels.

Monocrystalline cells are made from single-crystal silicon and possesses higher efficiency – upto 22.5%. The downside of this is that its expensive due to the nature of the manufacturing process – each cell in the panel is made from a single crystal. Polycrystalline, also made from silicon, is less expensive at the sacrifice of its efficiency – upto 16%. Here the cells are made from multiple silicon crystals with less material wastage. In theory, poly panels also have better temperature coefficient – low performance degradation at higher temperatures. However, this does not scale to large sizes in practice. Therefore, the main advantage of Poly becomes the low cost and that of the former becomes the higher efficiency and more power output per unit area.

On the other hand, thin film technology involves deposition of a photovoltaic substance like Silicon (amorphous), Copper Indium Gallium Selenide (CIGS) etc. on to a solid surface like glass . They have a distinct completely black appearance and looks more visually aesthetics. The main drawback is its low power efficiency, hence requires the most space – not suited for residential installations in its current stage of development. In the worldwide PV module manufacturing capacity ( over 130 GWp in 2017), PERC is gradually becoming the standard for mono modules; bifacial being the natural evolution for PERC. The survey by ITRPV (2018 report) predicts that around 40% of the market will be bifacial by the end of 2028.

As the name indicates, they can generate power from both the sides – via sun’s irradiation on the front and reflected irradiation on the back. The first prototypes came up between 1977 to 1980. It is still not mature enough for a wide spread adoption. Such panels are usually made of transparent glass on both sides (conventional panels uses black surface with aluminum contacts) to enable power generation from the reflected (albedo) light. These PV modules can see upto 30% increase in power generation as compared to their conventional counterparts. However, among other factors (location, diffuse fraction etc.) it will depend on the mounts and surface that reflects the light. They have found applications even in low-earth orbit where Earth serves as an abundant source of albedo light. Performance analysis exists for the same as well.

If they are installed on top of highly reflecting surfaces, it will naturally increase their power yield. Usually they make use of high quality monocrystalline silicon and come with or without frames. The later is easy to install and the former requires mounts with rubber flaps to prevent any structural damage to the glass.

The reflected irradiation will also significantly depend on the angle of inclination of the mounts. As a result, their usage in the common Australian slanting roof architecture will not benefit from extra power production. There are many possibilities with such modules.

How to Quantify Output?

However, sufficient data and methods to standardize their test results are still lacking. Hence, it would be very difficult for manufacturers to claim that x type of bifacial solar panels will bring y% extra energy for a conventional family home. Furthermore, as obvious by now, it will also heavily depend on the mounting frames. Therefore, the type pf trackers, optimal mount height also become relevant when it comes to commercializing these category of modules. These extra factors  further adds to the sense of “unpredictability of power output“ from this new technology. Nonetheless, they are coming to the main stream and companies have started simulations to predict their various use-cases and to quantify the power outputs. Most tier-1 manufacturers (Canadian, Trina, Q Cells etc.)  already have these type of panels in their product catalogue atleast on a prototype scale. Standardization can help in solving the ambiguity around this technology and increase their marketability to economies of scale.

23 Years back, Australia’s first Grid-Connected solar power plant went online. Regen founder, Prof. Chem Nayar, played a significant role in envisioning of this 20kW system in Kalbarri (600 km northwest of Perth) Western Australia. The sunlit town was located near the end of a 136 km long transmission line which created problems like voltage fluctuations. This made it a perfect host to test one of the prominent prototype renewable energy project in 1995.

In January of 2018, World’s first bifacial project went online  in Quinghai, China. This is a 100 MW installation of the Hydropower Development Co Ltd. Out of this 71 MW are bifacial – 20 MW each from LONGi Solar, Trina and Jinzhou and 11 MW from JA. As of 2018, LONGi holds the record for the highest efficiency of a monocrystalline silicon wafer – 22.71%. Their test results show that double-glass two-sided P panels can attain “2-digit” higher yield. Earlier in the year, after 6 months of R&D,  Risen Energy was able to successfully manufacture 370W bifacial PERC

With lowering costs of PV cell production, bifacial solar panels are picking up traction now. They might become commercially and economically viable for residential and commercial end-users within a few years. Then, we might even see a tier based categorization system for PV mounts as well. Otherwise, manufacturers might sell or recommend a certain type of mounts to go along with their two-faced PV modules.