Hydrogen Powered Home in Western Australia Through Solar and Battery

At this point of time, there exists a spectrum when it comes to possible renewable energy options available to us. Many are in early stages of development, some at pilot testing scale, while others are at commercial utilization level. Solar, wind and hydro power options constitute three of the most prevalent renewable power sources in the world. Hydrogen is one that falls in to the second category mentioned above; several prototypes using this system already exists. It can power entire homes, transport systems and other cooking requirements. One such test facility is the hydrogen powered home by ATCO Australia.

Located in Jandakot, Western Australia, the concept makes use of the usual mix of solar power, wind power and solar batteries to generate green energy. The $3.3 million ($1.66 million support from ARENA) project consists of 300kW solar panels, 250kWh battery storage and a 150kW electrolyzer. The energy generation from this mix of renewables has three purposes: 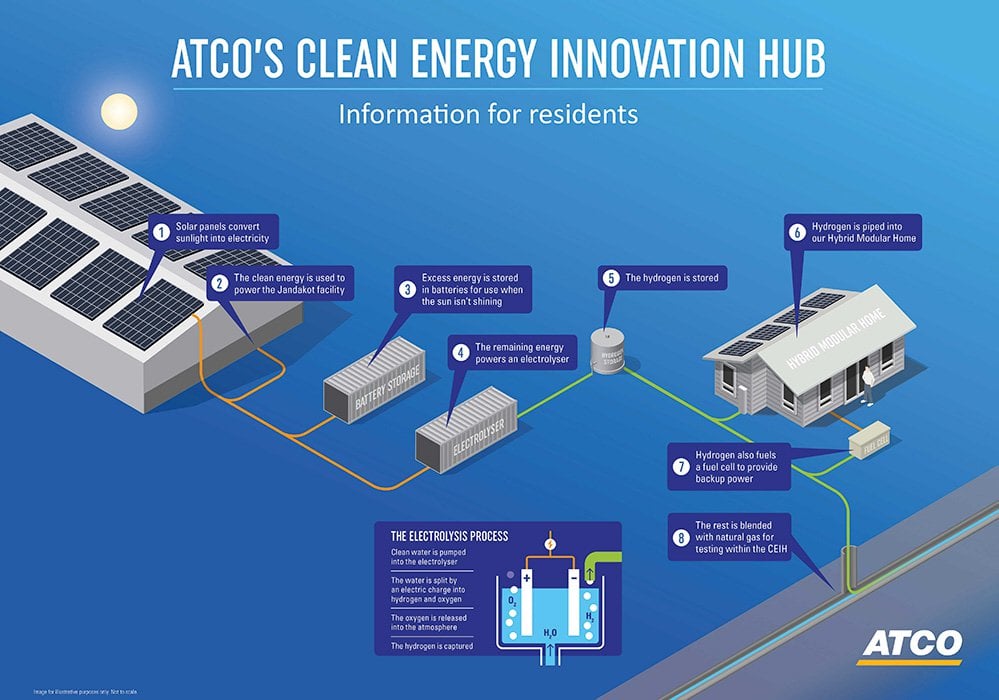 At its core, the process for hydrogen gas generation is simple; subject pure water to an electric charge (process of electrolysis), and split it into its component gases hydrogen and oxygen. The former is stored while the later is an emission into the atmosphere. Furthermore, this is one of the few processes that release oxygen into the biosphere, instead of the usual carbon footprint. However, commercialization at an economic scale is one of the biggest challenges due to the large power requirements. This is the stage where other clean energy sources like solar, wind and hydro enter the scene. One part of this hydrogen is fed into the demo home, which makes use of it for cooking and other household appliances. On the other hand, the second part is fed into the natural gas grid. This hydrogen system is not new to Western Australia. The Asian renewable energy hub (AREH), is an in-the-pipeline project that will generate hydrogen through wind and solar power, and export to Japan and South Korea.

The demo of this hydrogen powered home has received praise from key political figures in the country. In addition, hydrogen based renewable energy is in the long term scope of the WA government’s RET. Their recent $10 million hydrogen fund, AREH etc. are evidence for this trend. As the clean energy growth in the country continues towards the national- and state-level RETs, Australia can also become a valuable clean energy exporter to our trading partners.