Since the industrial revolution, adoption of some technologies were so prominent that they gradually integrated into our social lifestyle. IC engines, mobile phones, computers are few such examples. One such recent technology evolution is the rooftop PV system. A decade earlier, rooftop PV were a luxury; end-users (residential or commercial) had to evaluate their payback period prior to investment. In 2019, solar panels have transformed to a necessity that it has even considerable effects on the National Electricity Market (NEM). With such growth in the Australian renewables, mainly solar, it is not surprising that it also influences the employment market of the country. The latest report by the Australian Bureau of Statistics has some interesting points on the state of solar PV jobs and renewable energy employment market.

The full-time equivalent (FTE) employment report was in the period between the financial year 2009-10 and 2017-18. Over the course of this period, there was an increase of 3,890 solar PV jobs. This 28% increase was predominantly in the large-scale solar farm constructions (1,950 FTE jobs), followed by the roof-top PV systems. 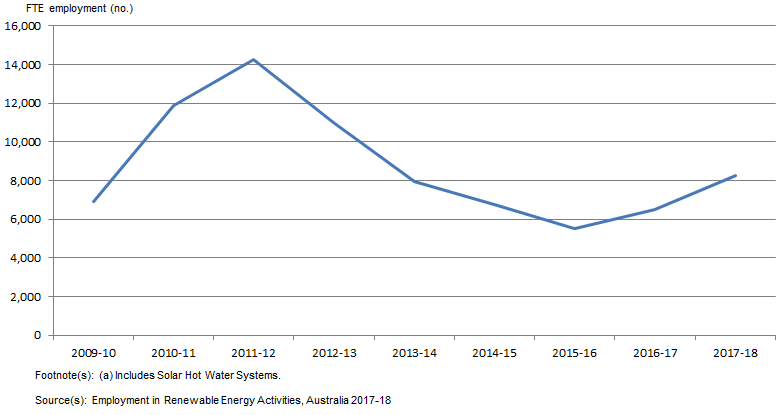 Here are some other important points from the report:

Coronavirus Precautions – On the Day of Solar Panel Installation

Tesla Powerwall for Australian Homeowners in 2020