Recently, we reported on the 15 GW Asian Renewable Energy hub in Pilbara, Western Australia. Environmental Protection Agency (EPA) recommended this project in May 2020. As of Oct 2020, the WA government has also granted approval for the project. The project provides enormous jobs, skills, revenue, and other opportunities for local people. Moreover, it will be an international hub of renewable energy. The 10-year construction timeframe and operational-maintenance phase can see up to 5,000 and 3,000 new jobs, respectively, in the state. The project now planned to extend to 26GW of combined wind and solar power generation. After completion, this will be the largest power station on earth. Most importantly, low-cost clean renewable energy will not only power mines and Industry but also the large-scale production of green hydrogen.

The first stage of the project will include 10GW of wind and 5GW of solar. However, the government decided to provide one-third of the total power production to Pilbara consumers. The remaining would serve new and existing mining operations, mineral processing, and the domestic and international green hydrogen markets. As per the current schedule, construction will begin in 2026. The main infrastructure would be built around the East Pilbara with a corridor passing through the Shire of Broome. As per the minister’s office, this project “will put Western Australia on the map as a major contributor to lowering global carbon emissions”.

The Western Australia Renewable Energy Hub encompasses 6,500 square kilometers of land in the East Pilbara region of Western Australia. It is on the traditional lands of the Nyangumarta People, who have been closely engaged in the project since its inception and have actively participated in site ecological studies. This renewable energy hub is the potential to create mass benefits to this region moreover the whole country.

Some of the benefits as follows 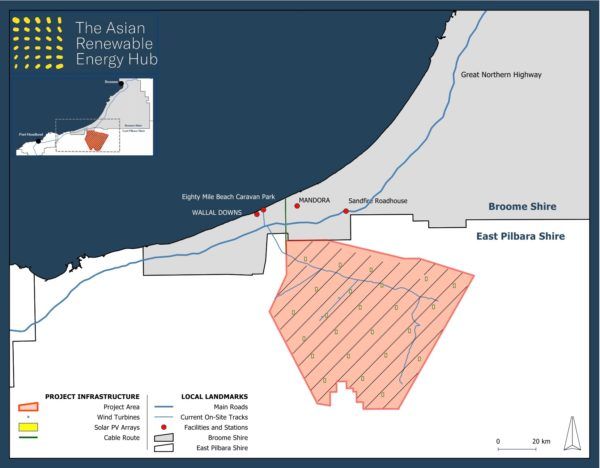