Floating PV systems have many benefits – optimal space utilization, better performance, minimized algae growth in water bodies etc. Consequently, this technology was initially popular among  island nations due to their smaller landmass  Floating systems utilize the same technology as their landmass counterparts. . They can be deployed in lakes and quarries. However, the technology is not mature enough to be used in oceans. A study conducted by KWRC has shown that floating arrays are 11% more productive than the land systems. The world’s largest floating solar plant went online this month. 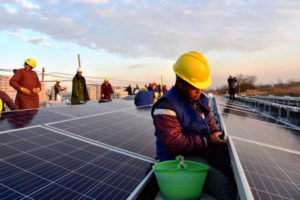 First phase of the 150MW floating solar plant in the Anhui province of China was connected to the grid on December 10. Being developed by the Three Gorges New Energy co., the plant will be at full capacity from May 2018. The overall project cost is estimated to be USD 151 million. Due to grid congestion, about 6% of the total solar energy generated in the country could not be utilized. As a result, the concept of floating solar systems is gaining traction in China. Furthermore, in capacity, this plant has overtaken the 40MW floating facility built by Sungrow in Anhui province. This Sungrow array, located on an old coal mine,  is able to power 15,000 homes. Most of all, earlier this year, China has announced an investment of over USD361 billion in renewables till 2020. This shows the renewable energy commitment of the world’s second largest GDP. 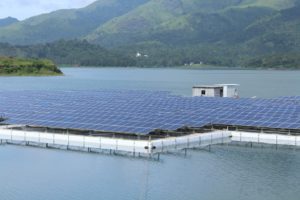 This year, Regen Power was a consortia member who installed and commissioned the largest floating solar plant in India. It is a 500kW system set-up on the Banasura Sagar reservoir in Kerala. The entire array is divided into multiple floats. Each float has 114 x 260W solar panels and 33kW ABB inverter. Commissioned in October 2017, the plant outputs about 700,00 kWh to the grid. You can read more about the project here. India has set a renewable energy target of 100 GW by 2022. Out of this, 16.6 GW is currently under installation. India’s largest solar plant, 648 MW capacity Kamuthi farm, was also comissioned this year in Tamil Nadu. The floating PV market is evolving with the renewable energy industry. As a result, they are finding widespread applications in supplementing energy production without affecting the terrestrial natural ecosystem and agricultural lands.