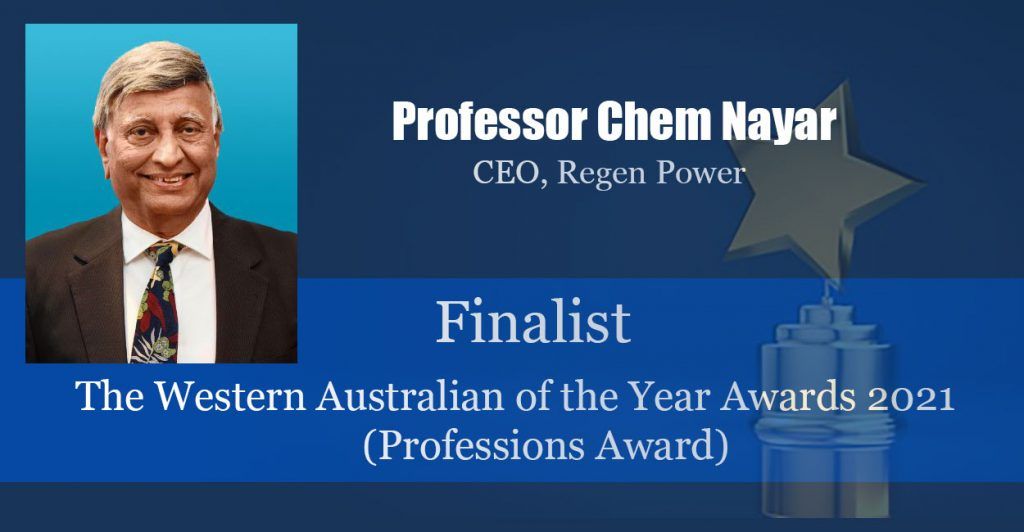 We are very happy to announce that Professor Chem Nayar is a finalist for this year’s Western Australian of the Year Awards in the Professions Award category.

The Western Australian of the Year Awards Gala Dinner will be held on Friday 4 June at Crown Towers.

Emeritus Professor Nayar’s 51-year career in electrical engineering and renewable energy places him as a pioneer at the forefront of academia, research, innovation, and the commercialisation of solar and wind power systems in Australia and overseas.

His contributions have been formally recognised as a Finalist in the WA Australian of the Year Awards 2021; Lifetime Achievement Award – Australian Committee for Power Engineering in 2012; Ambassador Award Winner and Product & Technology Award Winner for ‘Hybridgen’ from the Sustainable Energy Industry Association in 2011; and, the Australia-India Education Fellowship in 1995.

He was Founding Director of the Centre for Renewable Energy and Sustainable Technologies Australia at Curtin University, which was renowned for its applied research and training in power conditioning and control systems for remote area power supply systems and weak electricity grids.

Professor Nayar has achieved many notable academic, engineering, commercial projects, and international achievements over his career that have changed lives for people living in communities. His extensive academic experience, knowledge, and insight into practical applications of technology continue to benefit industries such as remote communities and islands where hybrid, renewable microgrids are facilitating the self-sufficiency of resorts and remote islands using state-of-the-art wind turbines and photovoltaic modules.

He has worked as a consultant to international agencies, the United Nations, and the World Bank for the design, testing, and installation of photovoltaic power plants using Australian technology (approximate value of US$20M) during 1996-98. His research work resulted in several products for renewable energy such as PM wind generators, inverter for solar water pumping, controller for hybrid power systems, and grid-interactive inverters.

His willingness to share innovative research and commercialisation of technology have supported renewable energy companies and energy-efficient technology.